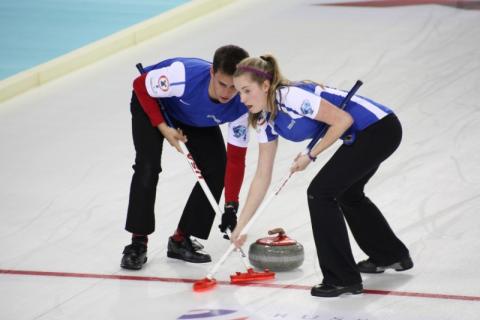 (STEVENS POINT, Wis.) – The Eau Claire Curling Club has always been good to Sarah Anderson and Korey Dropkin as the duo won their second mixed doubles national title at this four-sheet club this afternoon.

Three years ago, the young duo won their first title with a win over Maureen Stolt and Peter Stolt (both of Plymouth, Minn.) and did it again today by a 6-3 score. The Stolts, who won the title in 2013, never had the lead as Anderson and Dropkin took an early lead and held on to win the 2018 USA Curling Mixed Doubles National Championship in Eau Claire, Wis.

“It was a very well run national event with great teams and great ice. We are excited to represent the USA in Sweden in April,” said Anderson, a two-time junior national champion. The duo finished the competition with a 7-1 record.

In the semifinals this morning, Anderson (Minneapolis, Minn.) and Korey Dropkin (Duluth, Minn.) shut out two-time Olympian Jessica Schultz (Richfield, Minn.) and Derrick McLean (Bothell, Wash.), 8-0, to reach the final. The Stolts had to go to an extra end to get past Christine McMakin (St. Paul, Minn.) and Riley Fenson (Bemidji, Minn.), 7-6.

In the gold-medal game, Anderson and Dropkin scored a single in the first and stole a point in the following end for a modest 2-0 lead. After holding the Stolts, who came into the final undefeated, to a single in the third, Anderson and Dropkin would repeat that pattern twice more as they scored a single in the fourth and stole a point in the fifth to extend the lead to 4-1. In the sixth, the game’s lone deuce was scored by the Stolts but they couldn’t keep the young Minnesota duo off the scoreboard in the final two ends.

Anderson, 22, and Dropkin, 22, both college students and members of the USA Curling High Performance Program, will now represent the U.S. at the 2018 World Mixed Doubles Championship April 21-28 in Ostersund, Sweden.